If some of you are scratching your head and asking “What’s Oath of the Brotherhood?” you’re likely not alone. A lot of people don’t know that I started my writing career by writing epic fantasy under the name C.E. Laureano! I’m pleased to announce that, several years after the initial 2014 release, the Song of Seare series being repackaged and reissued by Enclave Publishing in a special, limited edition hardcover, under my full name, Carla Laureano.

Even though I’ve spent the last few years focusing on contemporary romance, fantasy always holds a special place in my heart and remains my go-to escape read…and I don’t know about you, but after 2020, I can certainly use an escape!

Without further ado, I’m happy to reveal the brand new cover for book one, Oath of the Brotherhood, coming January 2021. 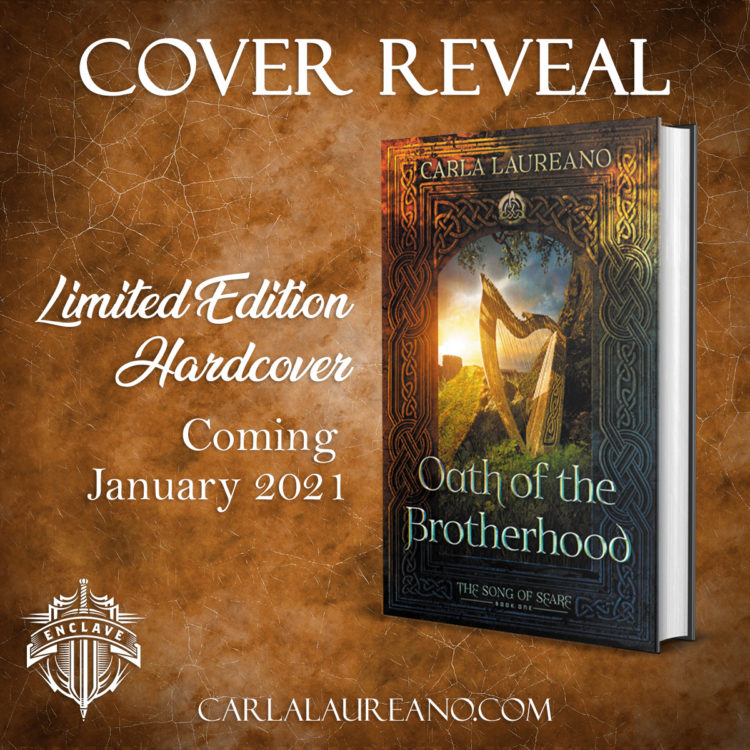 Isn’t it lovely? I’m thrilled with the work that the cover designer did in giving it a new look while still capturing the magic and the Celtic flavor of the original. Here’s what the story is about:

Stay tuned for more info, updates, and giveaways as we get closer to the release early next year! 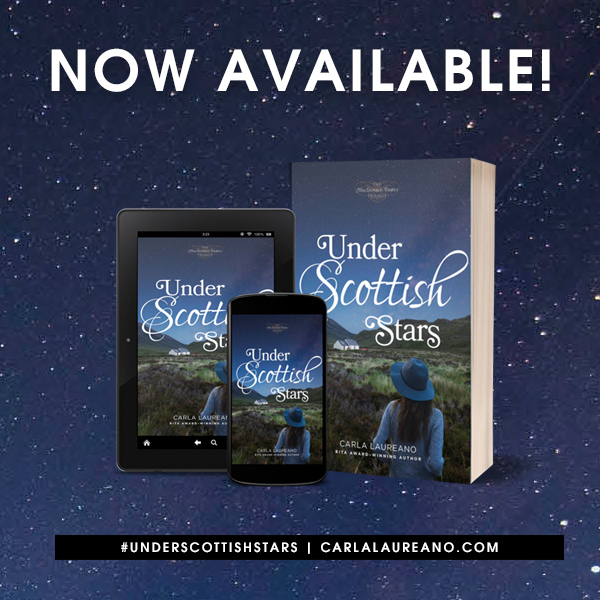 Whew! Did you ever think we were going to get here? If you are anything like me, it felt like this day would never come… five long years of waiting for the conclusion of the final book in the MacDonald Family trilogy. Of course, I didn’t think I was going to be trying to launch a book in the middle of a pandemic, which does put a damper on things… but I can’t deny that books have become an even bigger part of our lives (and will become even bigger as we realized there isn’t anything new but reality television to watch…)

All that aside, it does feel like an appropriate time to be launching Under Scottish Stars, which to me is the most “real life” of the three books. Serena MacDonald Stewart has already experienced marriage and motherhood, and she’s realized that life is a lot more than sweep-you-off-your-feet romance. Malcolm Blake has learned that sometimes family responsibility trumps hard-fought dreams. Which of course means that falling for the literal guy/girl next door is the last thing on their minds… and the exact thing they never knew they needed.

I can’t wait for you to experience Serena and Malcolm’s story and revisit your favorites from Five Days in Skye and London Tides. And I hope that for you, as it has been for me, this final story is more than worth the wait! 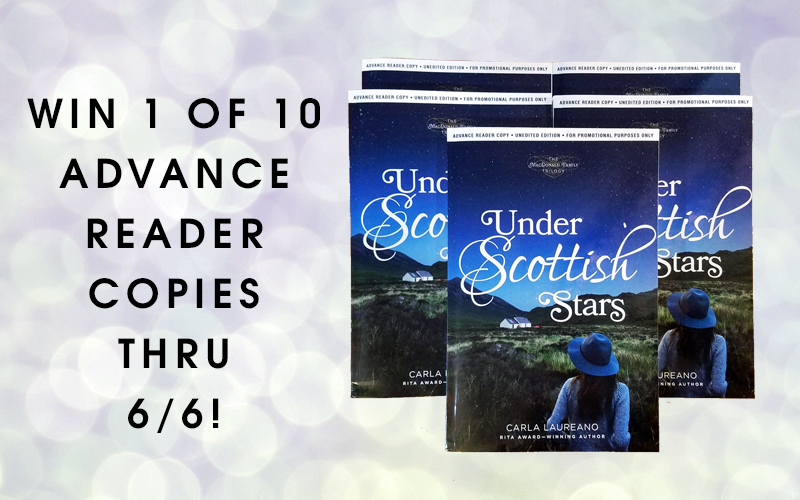 If there were a record for the longest time to publication after a book went to contract, Under Scottish Stars would probably win the prize! That’s why I’m thrilled to finally announce the arrival of advance reader copies of the third book in the MacDonald Family trilogy!

There are TEN copies up for grabs and two ways to enter:

The giveaway is open to entrants with US mailing addresses only. I regret that I can’t do a giveaway for my international folks, but shipping, which is difficult internationally at the best of times, is almost impossible right now. 🙁

Good luck to everyone who enters… and don’t forget to preorder a copy from your favorite retailer just in case! 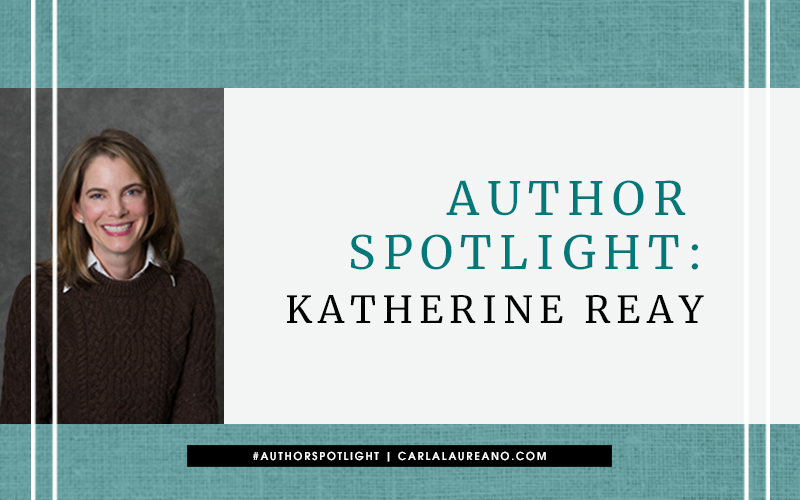 We’re back with another Author Spotlight, and today I’m excited to welcome fan favorite Katherine Reay! I’ve followed Katherine since her very first novel, Dear Mr. Knightley, which continues to be my favorite of her books, and I’ve been privileged to get to know her as a friend in the ensuing years. You’d be hard pressed to find anyone more enthusiastic about literature, as you might guess from her literary themed books–and all the delicious classic book references in all her novels. Today, she’s here to celebrate the release of her upcoming novel, Of Literature and Lattes, which (as you might guess) involves two of my favorite things in the world. 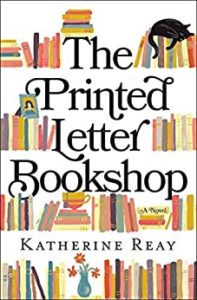 CL: Thanks for joining me here today! We’ll go right for the throat on this one… the hardest question on the list. Which is your favorite book that you’ve written so far?

KR: While it should probably always be the book about to release ;), I had a wonderful time with the three women in The Printed Letter Bookshop. In fact, I liked them so much, I returned to them, tangentially, for Of Literature and Lattes, setting the story in the same fictional town of Winsome.

CL: Oh, I know that is going to make some readers very happy! It sounds like you get as attached to your characters as I do. Which of them would you like to hang out with for a day?

KR: Kyle Baines from Dear Mr. Knightley. He starts the story as a 13 year-old, angry, foster kid who grows so much during the eighteen months of the story — and stole my heart.

CL: What genre would you write if you couldn’t write your current one?

CL: Ooh, we are finding out some interesting stuff. (Incidentally, I’ve always toyed with the idea of writing a spy novel.) Is the genre you’re writing now the first genre you attempted?

KR: Yes. I love contemporary stories and examining how we move, change, and grow in our own time. Although my current work-in-progress looks back to WWII, I believe my focus will always stay in the here-and-now.

CL: Now for another hard one: if you could have one career do-over, what would it be?

CL: I could totally see that, actually. But I think we’re all happy that you decided on writing for a career. Now, let’s dive right into the lightning round!

Coffee or tea?  Why choose?

Pancakes or waffles?  Again, must we choose? 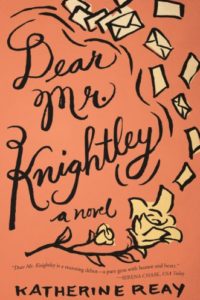 Public library or bookstore? Both.

Makeup or blowout? Neither.

Tent or RV?  Neither… Please, really, neither. 😉

Bikini or one-piece?  These days… One-piece

Don’t forget to add Katherine’s new novel, Of Literature and Lattes, to your reading list and mark it Want To Read on Goodreads! She is also generously giving away a copy to two lucky readers… scroll down to enter below! 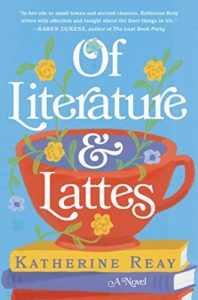 After fleeing her hometown three years earlier, Alyssa Harrison never planned to return. Then the Silicon Valley start-up she worked for collapsed and turned her world upside down. She is broke, under FBI investigation, and without a place to go. Having exhausted every option, she comes home to Winsome, Illinois, to regroup and move on as quickly as possible. Yet, as friends and family welcome her back, Alyssa begins to see a place for herself in this small Midwestern community.

Jeremy Mitchell moved from Seattle to Winsome to be near his daughter and to open the coffee shop he’s been dreaming of for years. Problem is, the business is bleeding money—and he’s not quite sure why. When he meets Alyssa, he senses an immediate connection, but what he needs most is someone to help him save his floundering business. After asking for her help, he wonders if something might grow between them—but forces beyond their control soon complicate their already complex lives, and the future they both hoped for is not at all what they anticipated.

With the help of Winsome’s small-town charm and quirky residents, Alyssa and Jeremy discover the beauty and romance of second chances.

Katherine Reay’s Of Literature and Lattes