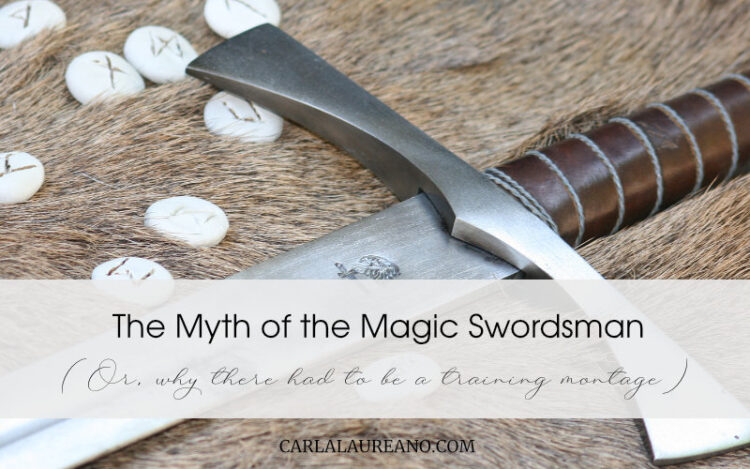 I’m a sucker for battle and swordplay in fantasy novels. It probably comes from my own martial arts background—I studied the Korean art of Tang Soo Do for five years and earned my first-degree black belt, then moved on to kung fu where after two years, I earned an intermediate rank in the White Lotus style. Shortly after that, I took up foil fencing at a studio in Southern California. While the studio is best known for stage fencing, I, having a bit of a masochistic personality, asked for the strictest teacher they had and ended up with a former Russian Olympic coach whose favorite word seemed to be “Again!” Between having gotten soundly beaten in my Chinese weapons training and being quickly humiliated by my fellow students in this western martial art, it became pretty clear to me that all the depictions in fantasy of farm boys who pick up a sword for the first time and show a preternatural ability with it are just… well, fantasy.

That’s why when I decided to use the weakling-to-warrior trope in my own novel, I wanted Conor’s progress to be based on something other than wishful thinking. Enter the training montage section of the book.

Sure, a lot more is going on in the time that Conor spends with the Fíréin brotherhood than just learning the sword (I’m really not giving anything away here… after all, the book is called Oath of the Brotherhood), but if I was going to have him fight some spectacular battles, I was going to make sure that he had legitimately earned the skills to do so. It’s one thing to be able to pick up a sword and defend yourself against the average landholder who doesn’t fight for a living; it’s another to hold your own against professional warriors. I gave him some natural talent with which to accomplish these feats, but mostly I gave him single-minded determination and a compelling reason to become one of Seare’s most skilled swordsmen.

Do you enjoy fight scenes in adventure, fantasy, and suspense novels? Which book has your favorite one? Comment below for your daily entry to win your own copy of the limited hardcover edition of Oath of the Brotherhood and don’t forget your extra one-time entries as well! 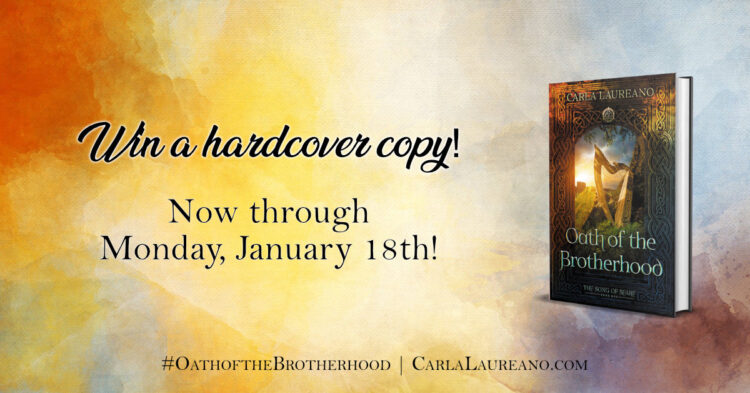 This week, I’ve been sharing the background and inspiration for my new release, the inspirational Celtic fantasy, Oath of the Brotherhood, as well as offering a chance to win your very own hardcover copy! (Outside US-winners will receive an e-book.)

To enter to win, simply complete the one time entries (newsletter sign-up/social media follows) and comment on any or all of the following blog posts. A comment on each individual post will get you an extra entry.

The World of Seare: Character Inspiration

The World of Seare: Setting Inspiration

Oath of the Brotherhood: Deleted Scenes

The World of Seare: Ancient Ireland

The Myth of the Magic Swordsman (live on Monday 1/18)

Get started with the widget below and then feel free to click through the posts above for your extra entries! Good luck!

Tags: giveaway, hardcover, Oath of the Brotherhood, Song of Seare 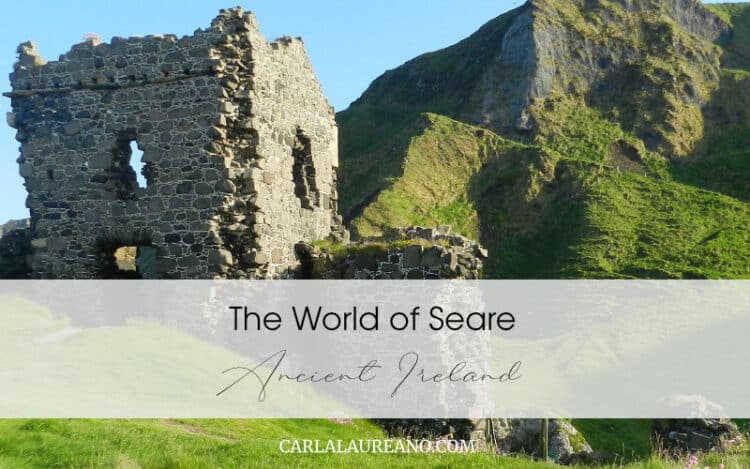 While Oath of the Brotherhood is 100% fiction, I enjoyed using a backdrop of the real culture of Ancient Ireland from about the 3rd century to the 7th century for my fictional Seare. We tend to believe that the peoples and cultures outside Rome at that time were barbarians (partially thanks to the fact that most of our records come through the Romans…) but in truth, Ireland was an advanced civilization with customs and habits that are much more consistent with our understanding today.

While many of the other details of Seare were changed or completely invented, Ireland’s rich history and surprisingly advanced culture was the perfect canvas upon which to build a new fantasy civilization.

Did you learn anything new? Leave me a comment below and get your daily entry to win a hardcover copy of Oath of the Brotherhood. And don’t forget to complete your one-time tasks for extra entries! 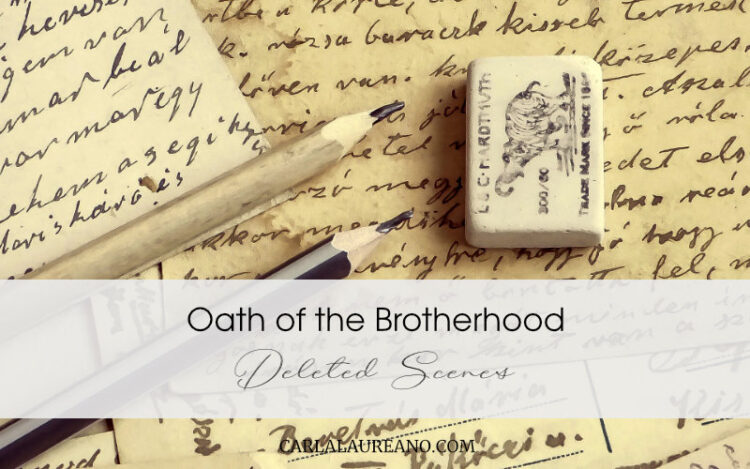 Oath of the Brotherhood has had many, many iterations over the years. It was a book I started when I was still working full time in marketing: I’d spend my lunch hours researching and my evening hours writing. So somewhere in the land of unusuable 3.5-inch floppy disks are some renditions that I hope will never ever see the light of day. (Excuse me while I go set fire to them to ensure that fact.)

But while preparing for this launch, I started sorting through my old drafts and came across a version that I actually, surprisingly liked. This prologue didn’t end up in the final cut because, while it was a compelling introduction, it didn’t fit with the book’s pacing and took away some of the impact of the book’s reveals. So I got rid of the prologue completely, started with a variation of chapter one, and that’s the one that’s in the book that’s (hopefully) in your hand. Normally, I don’t share abandoned clips because they either don’t fit the final version of the story, but this one I feel introduces the secondary characters in an intriguing way…

Riordan climbed the long, winding flight of stairs in the ancient keep, his feet moving silently on the stone steps, only the slightest breath of air that guttered the candles to betray his passing. It was late, well past the time the other brothers, save for those on watch, should be in bed. The meeting had been carefully calculated to garner as little attention as possible, but even if it hadn’t been, he could make himself nearly invisible, the presence of others who possessed the same skills notwithstanding. Riordan was considered one of the finest warriors of the Fíréin brotherhood, and it was not simply because of his skill with the sword.

Still, even if the brothers themselves had little interest in the news he carried, there were others who did the bidding of the darker forces of the isle, who would give dearly to know the message he carried. Once, such stealth in the heart of the Fíréin’s power would have been unnecessary: the ancient keep of Carraigmór which overlooked Ard Daimhin was warded by powerful Balian magic, a type that had been long forgotten in Seare, as far removed from their little tricks of mind and shadow as the ocean from a raindrop. Now, its power was weakening, gradually, imperceptibly, insidiously. Shreds of mist appeared in the trees, or on the surface of Loch Ceo, as if merely waiting for an opening, an invitation to enter the walls of Carraigmór itself.

Riordan put away those dark thoughts as he approached the terminus of the corridor, which dead-ended into a closed door. He lifted his hand to knock, even though he knew it was unnecessary. The Ceannaire had undoubtedly known he was coming before his foot touched the first step. Sure enough, when he swung the door open, the single occupant didn’t need to turn from his post by the window to greet him.

The voice was pleasant, well-modulated, elegant even, at odds with the leader’s compact, powerfully built stature. His reddish-gold hair was bound in a single long braid as was the Fíréin custom, his face clean-shaven in contrast to the current Seareann fashion. When he turned, Riordan as always found himself struck by the youthfulness of his features, even though he had known Liam since they were much younger men. His eyes, however, held a newfound wisdom and sorrow, as if his mantle of responsibility had grown steadily heavier.

Riordan remembered he had been asked a question and bowed his head slightly. “It is done.”

Liam smiled then, an expression that lit his face and erased any shadow of pensiveness. “I take it was as easy as you expected?”

The formality lifted, Riordan settled himself in a chair and regarded his friend with an eloquent shrug. “He owes me. Had it not been for my foresight—and politicking—it might be Fergus sitting the throne of Tigh instead of Galbraith. I just don’t think he expected me to call in my favor on behalf of his son.”

“I’m sure he didn’t,” said Liam lightly, taking a seat across from Riordan. “Especially since Clan Maonagh has never been a friend of the Mac Nir.”

Riordan studied Liam closely. As always, he sensed the things that the Ceannaire left unsaid, the insights meant only for him. “It’s a long game you play, my friend.”

“We play,” corrected Liam, “and not long now. I was put into this position of leadership for a purpose greater than the Fíréin. I’ve always known that, but I hardly expected to see these times come to pass so quickly. Surely you feel it. The wards around Ard Daimhin weaken daily, even as the gifts grow stronger in Daimhin’s blood. We will see the High King sit the throne of Seare in our lifetime, mark my words.”

A chill rippled over Riordan’s skin, but he was not sure if it was from anticipation, or foreboding, or both After five hundred years of division and strife in Seare, the return of the High King was something to be eagerly anticipated, but from the few prophecies to which he was privy, he knew that the return of Comdiu’s chosen leader would be presaged by darkness and destruction.

“You think my nephew has a role to play in all this?” asked Riordan doubtfully.

“I know he does. To what degree remains to be seen. Comdiu only shows me what I need to know in order to do His work. And I know that the boy’s fosterage is vital to his future.” Liam smiled reassuringly then, and his voice took on a more calming tone. “Don’t look so worried. For all our planning and clandestine meetings, our Lord has matters well in hand. He hardly needs us to do His bidding to achieve His goals. Remember, the outcome is already written, the end of the journey known since the beginning of time.”

“’But the path of the faithful is perilous and fraught with sorrows as well as blessings,’” quoted Riordan.

Liam’s gaze went distant then, an unsettling look that made Riordan think he perceived things in his mind’s eye that were far beyond this small upper floor chamber. But he only said softly, “It is indeed, my friend, it is indeed.”

Hundreds of miles away, in a highland fortress across the Amantine Sea, a young girl awoke in her chamber, her heart pounding. Somehow, she knew that beyond the safe stone walls of her home, a decision of great importance had been made, one that would change the course of her life. It was a weighty revelation for a girl merely five years old, but she was long accustomed to messages being delivered this way.

“What’s wrong, poppet?” whispered the sleepy nursemaid from her pallet across the room. “Did you have a bad dream again?”

The little girl shook her head and lay back down again. Instinctively, she knew that these were not things one spoke of openly. As she drifted off to sleep once more, two images remained in her mind: a craggy, towering fortress carved from a mountain, and the face of a little blond-haired boy.

What do you think? Does this pique your interest for the book? Does it surprise you to find that books go through so many iterations before publication? Leave me a comment below as your daily entry to win a limited edition hardcover copy of Oath of the Brotherhood.