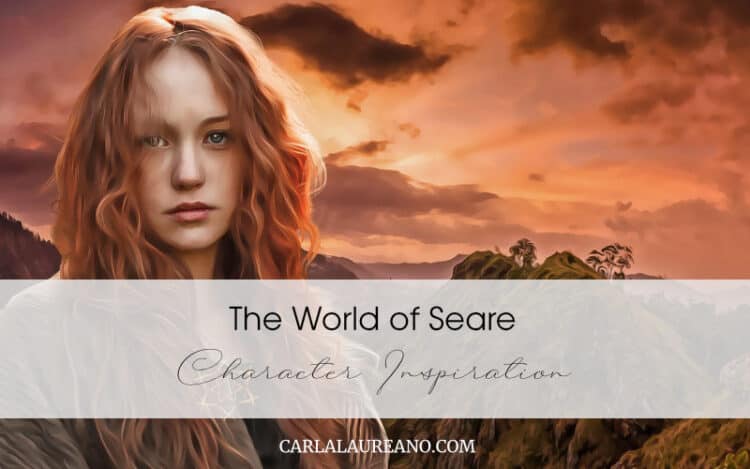 Typically, when I’m writing a book, it all starts with the characters. Even when writing fantasy, which takes extensive world-building and preparation before the first word goes on the page, I have a conception of the people who will populate my story world. In fact, it’s usually a character that won’t let me go that starts the whole idea in the first place. That character for me was Conor MacNir, a highborn lad whose naturally good and peaceable character was seen as a detriment in his place of birth. When tested, I wondered, would he crumble, or would he find a thread of steel in himself that he didn’t know existed?

Join me for a visual introduction to the characters of Seare as I envisioned them… and don’t forget to enter to win your own limited edition hardcover copy of Oath of the Brotherhood! (International winners will receive an e-book.)

Conor jerked his head up and stared forward while the king’s gaze roamed over him.

One corner of Galbraith’s mouth twisted in displeasure. “Tell me, have you started your training yet? Sword, bow, spear.”

“No, my lord.” Conor’s voice came out strangled, forced from his constricted throat.

“Then what exactly have you been doing for the last nine years?”

“Studying?” Galbraith’s tone changed, a note of curiosity in it.

“I can read and write the common tongue, as well as Ciraean, Levantine, and Norin. My Melandran is passable, and I know a bit of the Odlum runes.”

Galbraith stared at him for a long moment. The hall fell silent but for the crackle of torches and the occasional rustle of a lady’s gown, every eye riveted on the spectacle before them. Then, in one swift movement, Galbraith reached over and ripped the sword from the scabbard in Riocárd’s hands. The ring of metal echoed in the hall as the blade stopped a fraction of an inch before Conor’s eyes.

“The only language our enemies understand is the language of the sword.”

None of the patients taxed Aine’s skills, considering a single touch revealed what ailed their bodies. She made her examinations and assured them she could mix a remedy back at Lisdara. Soon, her wax tablet was full of names and notes, and the crowd dwindled to only a handful of petitioners.

When the last patients had been seen, Mistress Bearrach strode to Aine’s side and took the tablet without asking. She scanned the notations, clucking her tongue. “Too fast. You don’t spend enough time with the patients.”

Aine’s cheeks heated. “Do you think I got the diagnoses wrong?”

Mistress Bearrach’s scowl returned, but her black eyes twinkled. “I have no doubt they are correct. But it won’t do to make it look so easy. People begin to ask questions.”

Aine swallowed hard. “I don’t understand what you mean.”

“Don’t you? When you touch them, you know what’s wrong with them, just as you felt the wards.”

Aine tried to deny it, but her dry mouth wouldn’t form the words.

For the first time, the old healer looked at her kindly. “I know how difficult it is to keep such a thing secret. There shouldn’t be a need. But even here, different can be dangerous.”

Eoghan of the Fíréin Brotherhood

The path emptied into a secluded yard where several brothers, including Master Liam, drilled with unsharpened practice swords. The clash of metal ceased when Eoghan came into view, and voices hummed, undecipherable. Conor peered around the corner and saw Eoghan take up a sword and face two of the older brothers. Master Liam stood aside, watching.

Conor crept closer, aware he was trespassing on a private gathering, and flattened himself against the rocks.

With the sword in his hand, Eoghan transformed, seeming to grow taller and more confident. He assumed a guard stance as he waited for an attack. When it came, he sprang into motion with a speed and fluidity that made Conor’s jaw drop. The boy met each attack effortlessly, ducking in and out of range with amazing ease. Even with his unpracticed eye, Conor could see he was just toying with them, testing his skills. His opponents, on the other hand, were doing no such thing.

For more about Oath of the Brotherhood or to view your purchase options, visit the book page. Then enter the giveaway below to win your very own copy!