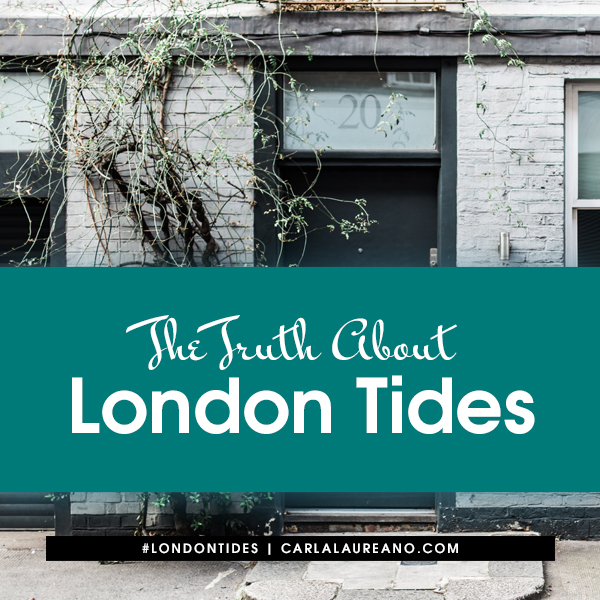 The other day, I read a not-so-great review on London Tides. Contrary to where you think this might be going, bad reviews don’t actually bother me. I always expect that certain readers are going to connect better with some books than another, and I always knew that this one would be polarizing, especially after a story as beloved as Five Days in Skye. But it did make me realize that there’s a big element that I’ve never publicly announced, and one that perhaps would enhance the reading enjoyment and discussion of this book for future readers.

London Tides is the only romance I’ve written that was intended to be read as an allegory.

This story begins with the character of Grace returning to London, hoping to reconnect with the “one that got away” or in her case, the one she threw away. She figures that Ian has probably moved on, gotten married, and forgotten about her, but something compels her to seek him out anyway. When she finds out that he is indeed still single, hasn’t forgotten her, and is actually willing to talk to her, they begin a tentative romance intended to discover whether or not their old relationship can be salvaged. What ensues is a messy and sometimes painful courtship complicated by Grace’s traumatic experiences and her resulting PTSD.

The single most common criticism I’ve heard of this book is that Ian is too good for Grace; that he shouldn’t have taken her back so easily; that she was a terrible person for jerking him around the way she did. And even knowing what I know, I can’t completely disagree.

But this is where we come back to the allegory part. Because when you put yourself in her place for a moment, and substitute God in Ian’s spot, you realize that it’s not as farfetched as it sounds.

As Christians, we are imperfect and often broken. We have been given the greatest gift of salvation and unconditional love by the Creator of the universe. And what do we do? Again and again, we sin against Him. Maybe not as overtly as Grace, but in our thoughts and actions. We let our obsession with our careers get in the way of our spiritual life. We chase what the world offers, and while we might never stop loving Jesus, our lives can look an awful like an unbeliever’s. Even if we think we are completely faithful, we sin in myriad ways daily, all of which make us unworthy to come before the throne of God.

Ah… but grace. (You didn’t think I chose that character name by accident, did you?)

Over and over we sin, and yet over and over God welcomes us with open arms. We are unworthy of His love and still He accepts us, unconditionally. We take advantage of his forgiveness and graciousness without thought…and yet we are quick to condemn others for their sins. We take for granted that He will always be waiting for us when we come back…and He is.

The allegory isn’t perfect in the book, of course, partly because in order for a story to function on the literal level, you can’t have a character who is actually perfect. But I intended the book to act as a reflection on the nature of unconditional love: unearned, often unasked for, but always freely given without any thought to the pain the object of that love may cause.

Sometimes, when we reject a fictional character for being too flawed, it’s not because we can’t relate to them…but because maybe, deep down, we see ourselves in them. It’s kind of like how the traits that drive me the most crazy in my children are the things I don’t like about myself.

So tell me in the comments below, does knowing this change your reading of the book? Does it come as a surprise or did you see it all along?