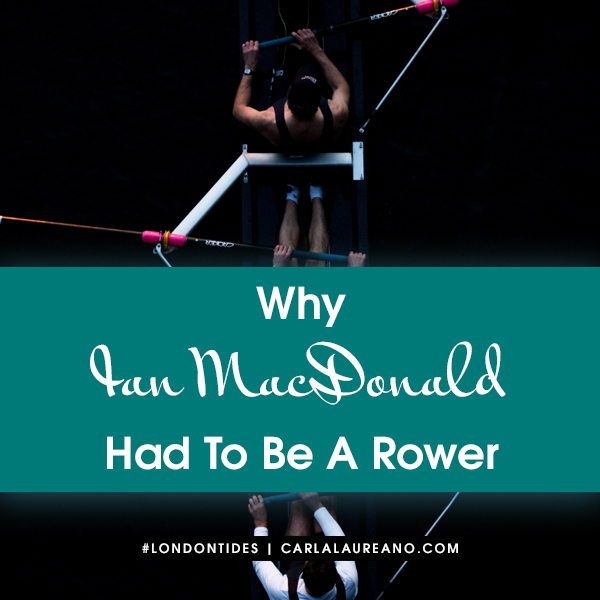 When I decided to make the character of Ian MacDonald a rower way back in 2012 when I wrote Five Days in Skye, it was less a conscious decision of backstory and more a logical element for a character who had the perfect English prep school upbringing. If you’re from a prominent English family, Scottish childhood or not, and went to Eton and Cambridge, chances are good you’re going to give rowing a shot.

It wasn’t until I wrote London Tides and began researching that aspect of the character did I understand just how telling it was about his character. And it wasn’t until I took up rowing myself this past spring that I truly understood what I always suspected.

Okay, that’s not really what I realized, but I’m coming to find it’s true, and I put myself soundly in that category. How else could you explain the compulsion to get up before dawn multiple times a week, put yourself in a skinny boat on freezing cold water, and then proceed to punish your body with an exercise that was once used as corporal punishment? And not only endure it, but love it so much you do it all again the next day?

With that in mind, Ian’s long history of rowing puts his personality into sharp perspective.

Okay, maybe not all rowers. There are a bunch of stereotypes about the personality of each person in a boat which are more or less true. The guys (and girls) in the middle are the powerhouse–they’re big, strong, and they go with the flow without complaining. Bow seat (the seat closest to the “front” when we’re talking about direction of travel) is responsible for the navigation of the boat and can see everything that’s going on with the other rowers. They’re the critics, and in the absence of the cox, the on-the-water coach. So they tend to be picky.

Stroke seat is at the very end of the boat, but since you row with your back facing the direction of travel, this is the rower who sets the rhythm of the boat. People who row this position are stubborn, unyielding, and the very definition of control freak. Why? Because this position is most sensitive to the motion of the boat, and if he doesn’t have a perfect sense of rhythm and steel will to maintain it, he can easily get caught up in the timing and/or mistakes everyone behind him is making. The boat looks to this person to keep them on track, and in a race situation, he’s the one who essentially sets the pace.

Is anyone surprised that this is the position that Ian rows? He’s technical, critical, and stubborn, traits that his family simultaneously depends on and hates. He is convinced of his own rightness, even when he’s wrong. But he’s also got a unshakable moral compass. It probably wouldn’t surprise anyone that I love to row stroke, too. Dance gave me an excellent sense of rhythm and enough control freak tendency to demand that everyone else follow my lead rather than the other way around. It wasn’t until I started rowing that I fully understood the character I had earlier only intuited. Of course Ian was rigid and uncompromising at times–his time in a boat had pretty much drilled it into him.

For a funny rundown on the seats in a 8+ that you may or may not understand, read this. I’m thinking it’s the seat that makes the rower and not the other way around, because I relate to all of these depending on what position I’m rowing that day.

At an elite level, rowing is all-encompassing endeavor. Rowers can spend four to six hours on the water, broken into two to three daily training sessions. That doesn’t include the on-land strength training, stretching, etc. meant to keep the body strong and uninjured. Even dedicated club rowers will spend a minimum of ninety minutes a day, five days a week on the water, plus our cross-training and flexibility programs on land…and all before we get to our day jobs. The ability to maintain focus on a sport over a long stretch of time is the hallmark of every serious athlete, but it takes even more in rowing, which has a more punishing effect on the body than anything but professional ballet. (Not a surprise then that I went from ballet to rowing, right?) I’ve had readers wonder how Ian could stay so hung up on Grace, even after she caused him such pain, even after it looked like there was no way they’d ever get back together. But Ian never waivered from what he wanted. And given that the only thing that could make him give up his first love–rowing–was Grace, it makes sense he would never give up on her.

Rowers can endure almost anything when they have a goal.

This flows naturally from #2. While I’ve only gotten a taste of the full misery of rowing from some long erg sessions (the rowing machine is a special kind of torture), it can be supremely uncomfortable, even crushing. But the body wants to quit long before its true limits, and to be an excellent rower, you have to have the mental toughness to push through even when everything in you screams to quit. And the only way you can manage that is to have something that you want even more than you want to quit. This kind of determination was the reason why I decided to give Ian a heroine who was as difficult, broken, and in need of redemption as Grace… and the reason I knew Grace needed a man who wouldn’t give up on her even after she hurt him. Ian’s capacity for pain and eternal hope when he truly wants something was ingrained at an early age and makes him the only person who could truly understand Grace’s love-hate relationship with her career.

Sometimes when you write a book and then gain personal knowledge of something you wrote about, you realize you didn’t get it all right. And while I might tweak a detail here or there if I had the chance, I was thrilled to find out that the things I had sensed intuitively about Ian and what his rowing past reflected on him were absolutely correct.

If you haven’t read London Tides yet, get your own copy of the second edition here!