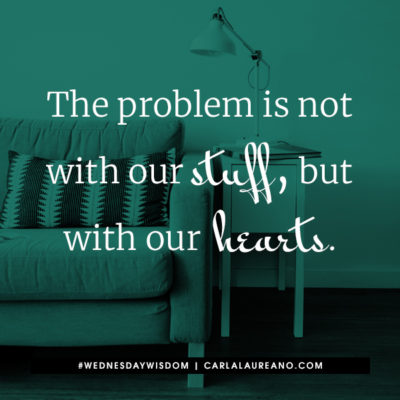 I’ve spoken on and off about my “minimalist journey” even though I don’t strictly consider myself a minimalist. I don’t count my possessions; I don’t take pleasure in talking about how few things I own or how much I’ve gotten rid of; and if you looked at my house, you wouldn’t think a minimalist lived there. (I do have kids after all.) But I have undertaken a journey to live more intentionally, to reject blatant, mindless consumerism, and to make room for the things that matter.

Up until a few days ago, I was member of a Facebook group with this same aim. It’s associated with a website that has, in part, helped me readjust my relationship with my material possessions and money. On its surface, we were all united in the goal to eliminate the things that get in the way of our peace and pursuit of the things that are important in our lives. For me, that means my family, my health, and the things that God has called me to do.

And to be fair, there are many others in the group with that goal. But lately I’ve seen more and more posts creeping in with the sole purpose of finger pointing or starting bandwagon arguments. Namely this quote: 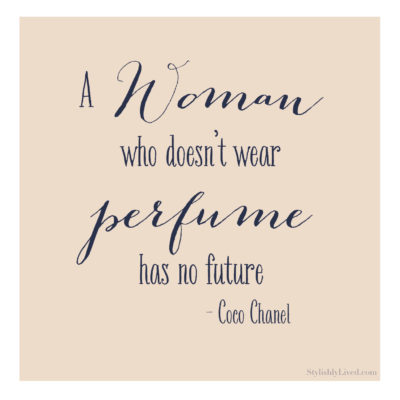 As far as I’m concerned, this quote is a product of its age, when there were particular standards of dress for everyone, not just women, and perfume was considered as essential as a girdle. (Side note: did you know that the famous choreographer George Balanchine used to give a different perfume to each of his ballerinas so he would know who had been in the elevator before him?) Personally, I don’t wear it because of allergies, but as long as other people’s fragrance doesn’t encroach too much on my personal space, I couldn’t care less if you do or not.

The discussion quickly devolved into insults, offended rants, and name calling toward a long-deceased designer.*

So this was the peace and kindness that minimalism was supposed to bring?

But here’s the thing. The minimalist journey was doing exactly what it was supposed to. It was stripping away all the cushion that material possessions bring and showing the true nature underneath. You can’t expect a lifestyle that eliminates to bring you peace and kindness if you don’t already possess it. All it does is expose what’s usually hidden.

I use this example about other people, but trust me, it doesn’t only go one way. Over the course of two years, I’ve seen my own jealousy, unkindness, and judgmental nature on full display. With every item I’ve gotten rid of, I’ve recognized my own lack of contentment, my deep-rooted fear of want that reflects a lack of faith in God’s provision, my desire to look one way when my life is really another. It’s not a comfortable process, but it’s an important one.

You see, the issue isn’t whether we’re minimalists or maximalists. It’s the lack in our souls that we try to fill with material possessions; it’s the dissatisfaction with our lives that makes us try to buy (or minimize) our way to happiness. In short, the problem is not with our stuff, but with our hearts.

But maybe, just maybe, when we take the steps to eliminate the distractions and the insulation and the numbing agents, we are making space to be filled with the One that can bring true peace, kindness, and lasting happiness. Regardless of how many items we own.

*Granted, the criticism of Chanel as an anti-Semite and Nazi spy/informer is justified. However, most of the vitriol was directed toward people who wore perfume, for no apparent reason.