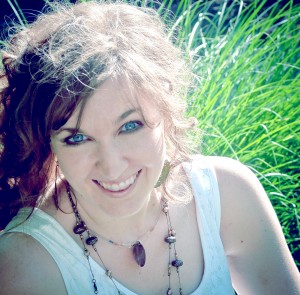 Today I’m thrilled to introduce you to another debut author, Melissa Tagg. Her first novel, Made to Last, came out less than a week ago, and already it’s piling up favorable reviews. I caught up to her to ask her a few questions about her book and her writing process.

Carla: Made to Last is about a woman starring in her own TV home improvement show. You’ve said elsewhere that DIY is not exactly your cup of tea. So what brought about the idea for this book?

Melissa: Well, it started with the movie Christmas in Connecticut. I LOVE classic movies, but a few years ago realized I hadn’t seen this one yet. It’s from the 1940s with Barbara Stanwyck, and in it she plays a magazine journalist who has built this fake life for herself…she’s even made up a fake husband. When her boss and a war vet decide they want to spend Christmas with her, she has to come up with said pretend husband. Only while she’s pretending to be married, she ends up falling for someone else.

I just thought it was the cutest storyline. So, I borrowed the basic idea. At the same time, I was reading about this actress from Canada (she was in the Anne of Green Gables movies!) who had her own DIY type show. Somehow, the two things merged in my head and the characters of Made to Last were born.

Carla: That’s so funny! I borrowed the set-up of Five Days in Skye from an old movie meet-cute, too. You know I have to ask this next question: have you had any spectacular DIY fails? And speaking of DIY, what do you think about Pinterest: awesome or tool of the devil?

Melissa: Um, fails, YES! One example: In school we had to take this home ec type class and we had to sew. SEW. That’s like a bad word in my family…my mom has passed on her disdain for sewing to me. So, we had to sew a laundry bag and in the process, I sewed my bag shut. Thankfully, a foreign exchange student from Brazil helped me out and I managed to complete the project.

But truly…anytime I attempt a craft, I fail. I just do. Even scrapbooking is stressful for me.

As for Pinterest, initially it freaked me out. Photos of crafts just intimidate me and all the recipe and food photos make me feel guilty for how and what I eat. HA! But my sister finally convinced me to open an account because there is, in fact, funny stuff on there. I like funny. So, I’ve gone from “tool of the devil” to “maybe I won’t die if I pin a few things here and there.” Though, to be honest, my sister does most of my pinning for me.

Carla: That’s what you call sisterly love. Or maybe just a really good excuse to procrastinate. While we’re talking about methods of procrastination… what reality show would you want to be on? (Assuming The Bachelor starring Tim Tebow isn’t an option. Oh, come on, you know I had to say it!)

Melissa: LOL! I don’t even know if I could do The Bachelor even if Tim was on it. The manufactured drama of it would eventually get to me and I’d run away crying. Haha! Although, don’t they usually film those in pretty sweet locales? So maybe I could deal with it for the sake of satisfying my travel bug.

But oh gosh, I am not a reality show girl. I don’t really watch any of them…which is another notch in the “it’s kinda weird that you wrote this book” thing. Is there a reality show where people get to hang out with their favorite band? Because I’d want to be on that one. And obviously I’d want to hang out with Coldplay. And I would beg them to hurry up and release another album.

Carla: So, what’s the deal with the Tebow love anyway? Was it just an off-the-cuff comment that turned into part of your platform?

Melissa: HA! OKAY. Here’s the story: So, last year I was on this kick of reading sports bios while on the elliptical. I don’t know, I guess reading about athletes made me work out harder or something. I read Tebow’s book. I loved it because of how he talked about honoring God through hard work and for whatever reason, it just totally inspired me to kick into high gear with finishing my book. So…I might’ve gushed a little about it online. And him.

Fast forward a few months and I gave a little talk at ACFW during the morning breakfast. Rachel Hauck introduced me and included something about me and Tim Tebow in her intro. People laughed. So I made a few more Tebow jokes as I talked. Next day, Peter Leavell (who is awesome) got up and also mentioned Tebow, alluding to my talk the day before. And then an ACFW blog came out calling me Melissa Tagg Tebow. And…uh, yeah, it spiraled. So I sort of unintentionally branded myself.

For the record: I am sure Tim Tebow is a wonderful person and he’s obviously got good looks. But I’ve never met him and probably never will and I am okay with that. Although, now that he’s team-less, should he decide to come play for the Iowa Barnstormers, I will happily become an arena football fan.

Carla: Now that sounds like a romance novel in the making… Moving on, why don’t you tell us a little about your writing process. Plotter or pantser? Multi-drafter or one-and-done?

Melissa: Oh, I’m definitely a plotter. Susan May Warren’s teaching through My Book Therapy has been hugely influential in my writing process. So, yes, I plot out my story BUT that plot always changes as I write. Characters do things I didn’t expect, show up at the wrong time or whatever. So I’ve learned to be flexible and not rigidly tied to that plot. And I definitely write multiple drafts. I have this dream of someday writing a perfect first dream, but I think it might be pipedream.

Carla: Me, too. I make so many edits that I’ve taken to using multi-colored pens to keep track of what change came when. Speaking of indispensible writing aids, what three things are essential to your writing process?

Melissa: Post-it notes. Caffeine. And someone to tell me I’m not a horrible writer and this story isn’t total crap and to just keep writing and that God wouldn’t have me doing this if He didn’t plan to help me out…and that everything is going to be okay. Hehehe…

Carla: All writers need those people who cheer us on. And as soon as everyone gets a look at this book, I have a feeling your cheering section will grow! Thanks so much for joining us today, Melissa!

And for all of you who can’t wait to read this, Melissa is giving away a copy of Made to Last to readers of this interview! Don’t forget to check out your entry options below. The winner will be drawn on September 27th, so drop by next week and see if you are a winner! ***Contest is now closed***

Melissa Tagg is a former newspaper reporter and total Iowa girl. Her first novel, Made to Last, releases from Bethany House in September 2013. In addition to her homeless ministry day job, Melissa is also the marketing/events coordinator for My Book Therapy. Melissa blogs regularly and loves connecting with readers at www.melissatagg.com. 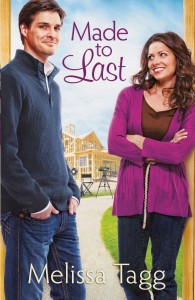 About Made to Last

Miranda Woodruff has it all. At least, that’s how it looks when she’s starring in her homebuilding television show, From the Ground Up. So when her network begins to talk about making cuts, she’ll do anything to boost ratings and save her show–even if it means pretending to be married to a man who’s definitely not the fiance who ran out on her three years ago.

When a handsome reporter starts shadowing Miranda’s every move, all his digging into her personal life brings him a little too close to the truth–and to her. Can the girl whose entire identity is wrapped up in her on-screen persona finally find the nerve to set the record straight? And if she does, will the life she’s built come crashing down just as she’s found a love to last?