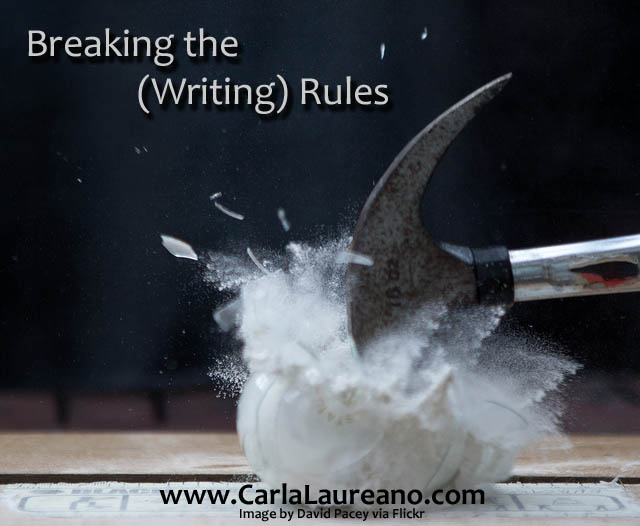 You know the saying: Rules are made to be broken. And if you’ve been around the writing business for more than fifteen minutes, you probably have a whole host of them in your head. What you may not know is that the rules are far less cut and dried than you might think.

Don’t get me wrong. Rules are important. The English language is based on rules. If everyone slapped together words into a sentence according to their own whims, communication would be near impossible. The subject/verb/object structure is the simplest method of constructing a sentence, but it certainly isn’t the only one. If we were restricted to only this one way of writing a sentence, works of literature would clunk along like a steam locomotive: they would eventually get where they was going, but the process would be slow-going and not always comfortable.

That said, I don’t claim to have all the answers. (You should suspect anyone who does.) There are as many opinions on this subject as there are writers, editors, and agents. I’m currently writing my fifth contracted book (only two of which are out), but in the course of working with excellent editors, I’ve found that the following rules can and should be bent or broken.

The is the first rule of writing that is taught to most beginners. It’s an important one, too. In numerous contests I’ve judged, you can tell new writers by sentences like this: His words shocked her. True, it conveys the idea, but it’s not very interesting. And a 90,000 word manuscript filled with “telling” like this gets old quickly. Contrast with a sentence like: His words slammed into her with the force of a tidal wave.

But, sometimes, telling is the only way to move a story forward, especially if your book covers a long amount of time. In my fantasy novels, I often need to use scene direction like, Spring moved into summer without further communication, and she had to concede that he was probably gone. (No, I didn’t actually use that line.) Can you imagine if I had to describe an entire season in which nothing interesting happened? Not only would the book be 300,000 words by the time it was done, but the reader would be asleep before I even got through April.

Rule of Thumb: Show when the scene is pivotal to character development or plot. Summarize when you need to transition quickly between scenes, seasons, or recap back story. Just keep it to a minimum.

As writers, we can get so sensitive to the idea of using cliches that we can swing too far the other way. I once read a book in which the hero was a mechanic, and he thought exclusively in tool, car, and oil metaphors. It was cute the first few times, but by the time I got to the midpoint of the book, I’d begun to hate him a little bit. The more unusual the metaphor, word, or thought, the fewer times you can use it without it drawing notice to itself.

The mark of a skilled writer is knowing when to choose between the unique and the commonplace. It’s perfectly okay to use simple constructions like “She smiled” or “He winked.” When you’re trying to move a scene forward, you don’t want to use something so unusual that the reader gets hung up on the words

Rule of Thumb: Use your unique turns of phrase when they won’t draw the reader out of the action, often as an opening or closing image to a scene. Go for the simplest and most concise way to express an idea that is not a cliche.

3) Write a book this way, because that’s how it’s always been done in this market.

I’m a firm believer in knowing your market and knowing the conventions and expectations of the genre. If you’re writing an inspirational romance, you won’t sell it if your character is dropping curse words every other page. If you’re writing a sweet romance, it probably won’t find a publisher if the heroic couple don’t get their Happily Ever After.

That said, “That’s how it’s always done” can hamper some great writing and unique ideas. Just because a CBA novel has never had a bounty hunter heroine (I don’t actually know this is the case… there probably has been a bounty hunter heroine) doesn’t mean that you can’t write one. The trick is writing something unusual within the confines of what is expected by your market or genre. Characters rarely drink in CBA fiction, but when I set out to write an authentic story set in Scotland, it felt disingenuous to eliminate all alcohol in a country with such a strong pub culture. I worked around it by keeping my characters from any semblance of drunkenness (which really didn’t fit with their characters anyway). Some readers still objected, but that was a calculated risk based on what I knew about my core audience, and reviews have reflected that it was a good risk.

Rule of Thumb: If you’re going to push boundaries, pick one area and stick with it. Readers (and editors) will forgive some minor deviations from “the way it’s done” if it’s done naturally and skillfully. But throw too many unexpected elements into the mix, and reviewers will cry foul.

Bottom line: rules give us a structure around which we craft our story. Think of it as a framework and not a straight jacket, understand how and why you are breaking the rules, and make your fiction a unique representation of your authorial point of view.

Now it’s your turn. What rules do you think are made to be broken and why?