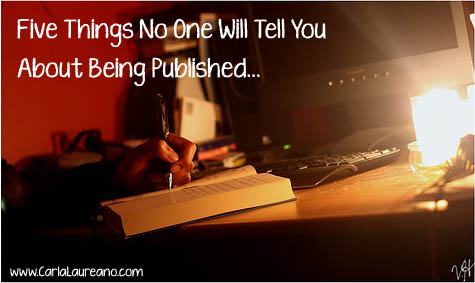 2013 was a pretty amazing year for me. My first novel, Five Days in Skye, was published, and I made the official jump from aspiring/contracted writer to actual author. With it came an inside look into the mysterious world of “being published.” But what I found was not what I expected.

Let me draw back the curtain on the five biggest “secrets” no one will tell you about the publishing world.

1. Being published is every bit as awesome as you think.

When I went to my first writer’s conference as an unpublished writer, I was a little bit in awe of my favorite authors. I begged introductions from friends who knew them, just so I didn’t have to look like a stalker when I went up and greeted them. (If you’ve seen me at a recent ACFW conference, you’ll notice I’ve gotten over that concern… I’ll go talk to anyone.) But at the time, published authors seemed to be so untouchable. They’d achieved the dream I’d been working toward for over a decade. But when I’d talk to them—often gushing over their most recent masterpiece—they would brush it off. “Oh thank you, it was really fun to write. Yes, it’s been a great journey.” I couldn’t quite figure out if they were just being humble or what.

Yeah. They were. Because now that I’ve had my first book released, I can tell you that it really is awesome. There’s nothing like seeing good reviews go up on Amazon, seeing your book make top 100 lists, or having readers write you and because they enjoyed your story. It’s just that published authors were unpublished authors at one point, and it feels really stuck-up and insensitive to say, “I know, right? Didn’t my publisher do an awesome job on the cover? It’s so cool to work for [insert publishing house here].”

But there’s a flip side to that coin, and it goes something like this…

2. Being published is way less glamorous than it seems.

Okay, I was prepared for being published not to be all fun and games. I didn’t think I would be doing radio interviews or talking to Katie Couric on TV. But I didn’t anticipate how much work was involved in getting a book to press.

Depending on your publishing house, you may get galleys, which is the typeset version of your manuscript the way it’s going to look in print. This is invariably when you find every last bad habit, pet phrase, and loose end—but it’s TOO LATE because the book is already typeset and the production department will be jabbing pins into your voodoo doll if you make them redo the whole thing. (Not to mention that most of us have a clause that says if we cost them money because of last minute changes, we get to pay the difference.)

Now, the way I’m telling it, the process still sounds fun. And sometimes it is. But that’s also when life will decide to throw everything it’s got at you. Not only are you working on all these edits and trying to write the next book under contract, this is the time when your furnace will blow, the water heater will go out, and you’ll have a flat tire on your car. When you’ve pulled the third all-nighter in a row, are wearing the same pair of gray sweatpants on which you spilled coffee two days ago, and you’re contemplating whether or not frozen French fries qualify as an appropriate school snack, you start to wonder whether you’re a masochist or just had a temporary lapse of sanity when you decided to pursue this line of work.

But when you see your book come out to rave reviews, it will all be worth it and your doubts will disappear, right?

Yes. And no. Which brings us to… 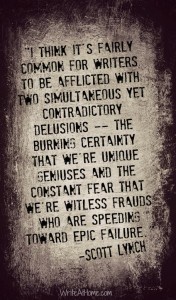 This is something that I didn’t understand until I started hanging out with lots of published authors. Basically, if you’re not neurotic, you are either not working hard enough or you are completely deluding yourself.

The fact is, you never really stop learning. Each book gets better. Each editor and agent teaches you something new. And the more you learn and the more you publish, the more you realize you really have no idea what you’re doing.

Writers also have short memories. Finishing a book that people will actually read and like begins to feel like a miracle, a sort of literary transubstantiation in which every garbage idea you had for the book comes out as a semi-coherent work of fiction. I don’t know an author who, when faced with the blank page at the start of the next book, doesn’t fear that they’re used up and will never write anything worthwhile again. I’ve taken to telling my friends to remind me this is how I feel at the beginning of every book, so when I freak out and threaten to quit writing all together, they can talk me down off the ledge. (It works with varying degrees of success, depending on the level of freak-out.)

The fact is this: pretty much every published author is deeply afraid the world will find out they’re a hack and their success has been nothing but luck—a conjunction of the planets, the result of an editor who accidentally acquired the wrong manuscript, or just a moment of complete insanity on the part of the publisher. And every single time a book comes out to good reviews (or even average reviews) it feels like a stay of execution, some breathing time to make ourselves into the image of what everyone perceives us to be.

I once questioned an friend about why more published authors aren’t active with writer’s groups and conferences. She looked at me and said simply, “We just don’t have the time.” I didn’t understand until I’d been through the process (detailed in #2) how time consuming publishing really was, and that it entailed far more than just writing a book and turning it in. Add to the fact that it’s difficult to make a living at writing, and most authors younger than retirement age are working full time jobs and raising families as well. Even those of us who are fortunate enough to write as our full time jobs find it difficult to keep up with the demands of everyday life and still meet our obligations to our publishers.

So if you work up the courage to ask your favorite author if she will look at the first chapter of your manuscript and she says no, it is not personal. It’s just that authors receive so many requests of that sort, it would be impossible to get anything written should they comply. That said, I find many authors are giving of their time and expertise, and if you have a chance to sit down with a multi-pubbed writer for a few minutes at a conference and ask them questions, most are quite willing to give you their insights. Just be gracious and considerate of their time, and you will be surprised what you can pick up. I can honestly say my path wouldn’t have been as smooth without the benefit of my published friends’ experiences.

You can save yourself a lot of headache if you take advice from those who have already “made it” to heart. Which leads me to my last point:

5. Published authors never really feel like they’ve made it.

Okay, I think Stephen King, Nora Roberts, or John Grisham will admit that by any standard, they’ve achieved success. (I suspect they still think they’re hacks, as detailed in #3 above, but that’s different than feeling like you’ve made it.) The thing is, publishing is hard. There seems to be a crop of new and immensely talented writers coming up every year, and in this business you’re only as good as your next book. There’s always the threat of losing your spot in the catalog to someone new.

That threat pushes us to do our best every time (well, not that we need it – see #3 again), but it also makes you want to stop and enjoy the moment a little more rather than pressing on to the next project. At this moment, you are living the dream. At this moment, you love what you do. Tomorrow is not guaranteed for any of us—not life, not success. So rather than resting on our laurels, most of us just want to write the best book we possibly can and pray that it touches someone, somewhere, whether it’s in a deep and meaningful way or just a bright spot in an otherwise difficult day. After all, isn’t that why we write?

So, whether you are published or aspiring, know that you are not alone. There are legions of writers out there, feeling the same way you do, struggling through first drafts and praying that today, their best is good enough.

Published authors, what do you wish you’d known going into the business? Aspiring authors, what question would you want answered if you had the chance?