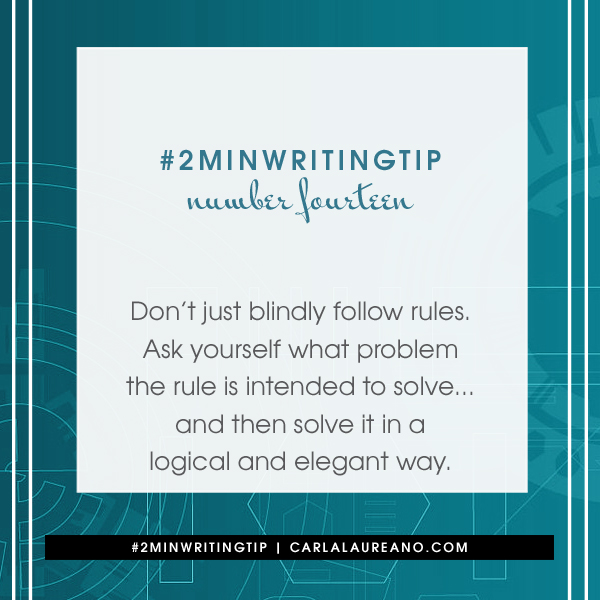 You’ll notice that in the tip above I did not say “break the rules.” There’s a reason that the rules were invented in the first place–they’re meant to steer beginning (and advanced) writers away from pitfalls that could ruin their stories, make them less marketable, or alienate readers. But in many situations, the rules have become so divorced from the problems they were meant to solve, following them blindly could do more harm to your story than good.

This is where as a writer you have to do a little detective work. Ask yourself why was that rule invented. In some cases (for example, the prohibition about head-hopping), it has to do with changing tastes and trends in the industry, and ignoring them could mean the difference between getting a book contract and getting passed over.

But in other cases, the situation is less clear-cut. For example, the much quoted and much more often ignored “write what you know.” What’s the problem it intends to solve? Looking like an idiot as you talk about something you have no clue about; misrepresenting a place, situation, or people group; pulling the reader out of the story to challenge your obviously made-up or incorrect facts. The easy solution: research first. Done.

How about my personal favorite: “Don’t write prologues.” I wrestled with this one, as I just finished a book that required a seven-thousand word prologue. Why shouldn’t we write prologues? Because too often they are an excuse to info-dump stuff that the writer is too lazy to weave into the story; very often, especially in fantasy fiction, it involves a character who won’t appear anywhere else in the rest of the story. Have you ever read a book that starts with an interesting character, only to find out that they died five hundred years before the rest of the story begins…and that story involves someone who is stupider and way less interesting than Prologue Hero? I’ve started and tossed more than one book with that problem. However, sometimes events happen to one of the POV characters that will directly affect the rest of the story, but structurally falls outside the main story arc. In that case, write your prologue with pride.

In conclusion, it’s good to be aware of the problem that the rule was intended to solve. It’s better to solve them in the most elegant and logical way, whether or not that is agreement with the rule itself.

[bctt tweet=”Be aware of the problem the rule was intended to solve. Then solve it in the most elegant and logical way, whether or not the rule agrees.”]