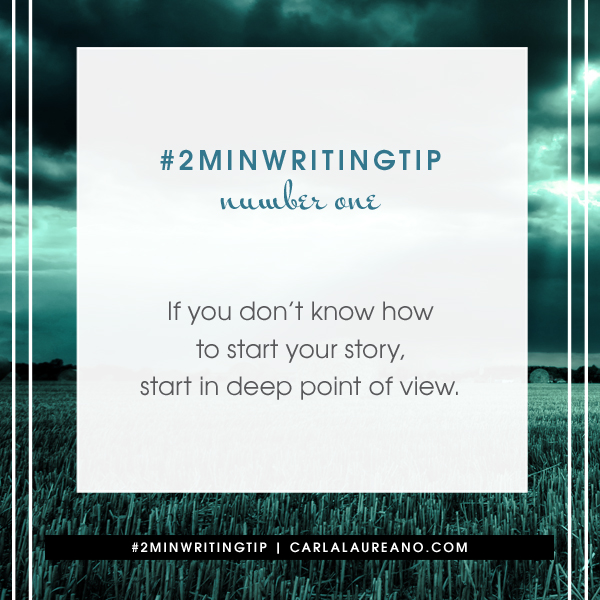 Omniscient – The narrator is clearly outside of the story and can see the entire picture at once, including things that the main characters don’t know. This could be the author, an unnamed narrator, or one of the characters telling the story from their older and wiser perspective. Jane slowly unwrapped the cupcake and took her first, delicious bite. Little did she know that it would be the worst decision of her day.

Limited – The narrator is also outside the story, but their perspective is limited to what the character knows at the time. Jane slowly unwrapped the cupcake and took her first, delicious bite. The pleasure didn’t last long. She instantly felt the back of her throat itch, indicating the presence of peanuts.

Deep – This blurs the line between character and narrator. While the story is still told from an outside perspective (using “he” and “she,” rather than “I”), we’re seeing events unfold from through the character’s eyes. There are fewer telling words like “felt” and “saw.” Jane slowly unwrapped the cupcake and took her first, delicious bite. A tickle touched the back of her throat. Then it began to itch like she’d swallowed poison ivy. Oh no. Were there peanuts in the cupcake?

You can see we get progressively closer to the character’s feelings with each degree we dial in the point of view. In deep point of view, we’re more immediately drawn into the story because we can sense her growing panic over what’s happening to her. While the first two might work for some story styles—you’re more likely to see more distant POV in literary fiction—commercial fiction relies on immediacy. Using deep point of view as much as possible pulls the reader into the story and keeps them there.

Which brings us to today’s tip. [bctt tweet=”If you don’t know how to start your story, start in deep POV. #2minutewritingtip #amwriting”] This approach has two main benefits. One, it prevents you from waxing eloquently on the landscape or the weather, which is a guarantee your reader will put the book down without ever finding out what the story is about. Two, it immediately connects the reader to the character. We don’t need to know where the character is or what he’s doing, just what he’s feeling and why it might be a problem for him.

Don’t believe me? Go and read the first page of The Martian by Andy Weir. You may not appreciate the language, but there’s no denying those first lines grab you by the throat and keep you reading.