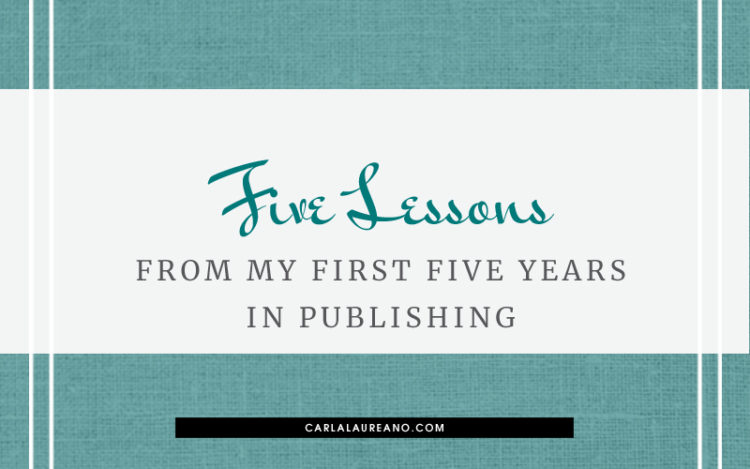 Yesterday, I celebrated the five year anniversary of my first published novel, Five Days in Skye. Part of me wants to say it feels like yesterday; the other part thinks it feels like a lifetime. Even though I went into publishing with my eyes open thanks to established writer friends and experience in corporate America, I can look back and say that I’m not the same person who signed that first contract. And while from the outside it may seem like my entrance into publishing was smooth, in reality, it was anything but. It has, however, taught me not only who I am as a writer, but who I am as a person.

Here are the top five lessons I’ve learned in my first five years.

1. No matter how well you plan, things are going to go wrong.

It will come as no surprise to anyone who has met me that I’m a type-A planner. For my very first marketing call, I showed up with my own marketing plan! I have hustled and networked to get the word out about my books. I’ve now published six books in two different genres in five years, not counting a two year hiatus when switching publishers. My debut won an RWA Rita Award. By all appearances, I’ve been pretty successful in a short period of time.

I’ve also had to change agents. I’ve been dropped by two publishers (both of whom quit their fiction lines). I’ve had different editors and marketing teams for almost every one of my books. I’ve faced some issues that I thought would be career-enders but were barely a blip. I’ve also run into some challenges that no one one anticipated.

The biggest surprise? I’m not in the minority. The more I talk to established writers, the more I realize these sorts of things are the norm, not the exception. The difference between success and failure is simply the ability to move beyond the challenges and keep writing.

When I attended my first American Christian Fiction Writers conference, I was shocked by one thing: everyone was so nice. How could a bunch of people who were all trying for the same thing—publication—be so friendly and helpful? Where was the competition? The jealousy? The fear of newcomers?

Oh, it’s there, as I found out. It’s almost impossible to put a bunch of passionate, creative people in an industry that’s inherently competitive and not see glimmers of our, shall we say, less generous natures. I’ve heard a few people say they were turned off from publishing when they learned what was going on below the Disneyland facade.

But here’s the thing: this is a community that will rally around its own when the chips are down. Get unfairly smeared on the internet? Hundreds of people will come to your defense. Have a family emergency? You’ll have members of a dozen churches praying for you as soon as you hit publish on your Facebook post. I’ve seen writers organize Go Fund Me campaigns for fellow authors whose houses have burned down, and meal trains and prayer chains for someone with a child in the hospital.

Above all, we’re both Christian and human. We’re not immune to pettiness, even if we don’t want to admit to it, but it doesn’t take much to remind us that we’re all one family in Christ. Like any other family, we take the bad with the good, and five years in, I’m still glad to be a member of the Christian publishing community.

In 2015, I began to have health problems that affected my ability to continue publishing at my previous pace. The good news was, with the help of a perceptive friend and a smart doctor, I was able to figure out what was going on and treat it. The bad news was, the medication and supplements I had to take killed my creativity. Or rather, it changed how I accessed it. I no longer wrote under fits of inspiration, putting down tens of thousands of words a week. Some days were a slow, hard slog. I feared that everything I was typing would put my readers to sleep.

When I read through my first draft, however, I discovered something shocking: I couldn’t tell the difference between things I had written while wildly inspired and those passages I pulled out word by painful word. Regardless of how I felt about the work, my understanding of how story worked and my ability to craft interesting characters hadn’t changed. The writing might have felt harder, but harder didn’t mean worse.

In the end, inspiration may be what makes the work fun, but it’s discipline and a solid understanding of craft that actually gets the work done.

[bctt tweet=”Inspiration may be what makes the work fun, but it’s discipline and a solid understanding of craft that actually gets the work done. | Five Lessons From My First Five Years in #Publishing”]

While most indie authors embrace the idea of being a business, it’s easy in traditional publishing to feel like an employee. In reality, the process is similar: I’m either assembling my own team piece by piece or I’m trusting a publisher to do it for me. (Or in my case, doing both.) Either way, I’m outsourcing many elements of the book production process for the most successful outcome possible.

Still, publishing success can feel out of my control and subject to the whims of the reading public. It helps to focus on those areas that I can influence. I focus on continuing education. I read branding and marketing books, take seminars, learn from others who are more experienced than I am. I experiment with marketing and social media. But more than anything, I think of myself as a business to be invested in. Regardless of the numbers on the royalty report, I know I’m taking the necessary steps to move in the right direction.

5. Writing is what I do, but it’s not everything I am.

This is the corollary to #4. It’s easy to get wrapped up in the work and the marketing and the drive for success. It’s easy to feel like I’m slacking off if I’m not spending my waking hours working. In reality, I need a life outside of writing. Not just for the people who depend on me, but for my own well-being. When my world gets too narrow, it’s easy to inflate minor career annoyances or failures into existential crises. (I’m a writer; I’m nothing if not dramatic.)

While I’ve abandoned the idea of work-life balance on a daily basis, I whole-heartedly embrace the Ecclesiastes view of everything having a season. The times I’m not writing remind me who I am away from the work, the things I love, the things that are important to me. It’s how I know that I can keep my writing career in the proper perspective; as a blessing and not a burden; as a privilege and not a right. If and when the time comes to give it up, I know that I’ll be fine, because I haven’t wrapped up my entire sense of identity in Carla Laureano, Author at the expense of Carla Laureano, Person.

All in all, it’s been a wild five years, and one I’m immensely grateful for. Thanks for coming along on the journey. And here’s to—I hope—many more! 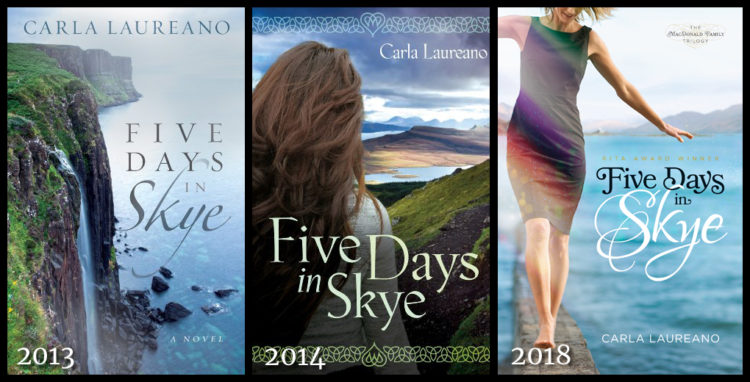 Did any of these lessons surprise you? If you’re a writer, what unexpected lessons have you learned on your journey?