Happy New Year! I’m thrilled to be back blogging with a new format and a fun line-up of guests and topics for 2014. For once, I took some much-needed time off to read and relax over the holidays, several of which were the initial offerings from Zondervan’s new A Year of Weddings novella series below. Here’s my take on the first two– both of which are quick, enjoyable reads for a lazy holiday afternoon. 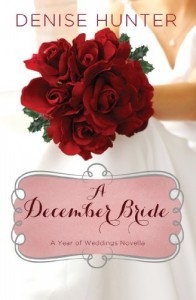 A December Bride by Denise Hunter

What started as a whim turned into an accidental—and very public—engagement. Can Layla and Seth keep up the facade in Chapel Springs this holiday season—for the sake of her career . . . and his heart?

Under normal circumstances, Seth Murphy—the best friend of Layla O’Reilly’s ex-fiance—would be the last person she’d marry. But the news of their upcoming (and phony) nuptials convinces a big client that Layla may be high-society enough to work for his agency—a coup that would put her fledgling home-staging business on the map.

Seth has secretly loved Layla for years, even when she was dating his best friend. Maybe she’ll never forgive him for the way he hurt her back then, but he has to try. And Layla is willing to keep up their engagement farce until she’s landed her client. For Layla, it’s the chance to save her career. But for Seth, it’s his last chance to win her heart.

I confess, I have a difficult time with novellas, especially romance novellas, because it’s tricky to build a believable relationship in 25,000 words or less. However, Denise Hunter’s A December Bride does a nice job of creating a light and sweet romance in a small package. Long time readers of Hunter’s will recognize the set-up–a fake engagement/marriage perpetuated for the sake of career/finances–from The Convenient Groom and The Accidental Bride, and some may take issue with the fact that this a relationship founded on a lie. But some festive holiday touches and a couple of very sweet moments more than make up for the fact that the length never really allows us a chance to know Layla and Murphy as we have her other couples. All in all, A December Bride is a worthy start to the A Year of Weddings novella series. 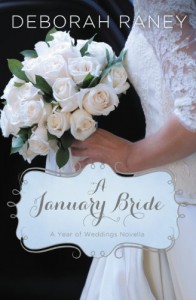 A January Bride by Deborah Raney

Who can work in a house that’s overrun by contractors and carpenters? Not Madeleine Houser, a successful novelist who gladly accepts the help of her octogenarian friend, Ginny, to arrange for a temporary office in the charming bed and breakfast owned by Ginny’s friend, Arthur. Maddie’s never met the innkeeper—-but a friendship grows between them as Maddie and Arthur leave messages for each other each day. To Maddie’s alternate delight and chagrin, she seems to be falling for the inn’s owner—-a man who’s likely many years her senior—-and who she’s never even met.

While I’ve heard stellar reviews of Deborah Raney’s books, I’ve never read one myself. After A January Bride, I can understand the high regard for her work. Her writing is accomplished and polished, and she manages to achieve an unhurried pace even with the word count restrictions of the novella format. Most fun is the way Raney lets us glimpse the truth about the others’ identities far earlier than the characters themselves do, giving the reader an “insider’s view” and building anticipation to the final reveal. A quick, delightful read. Highly recommended.