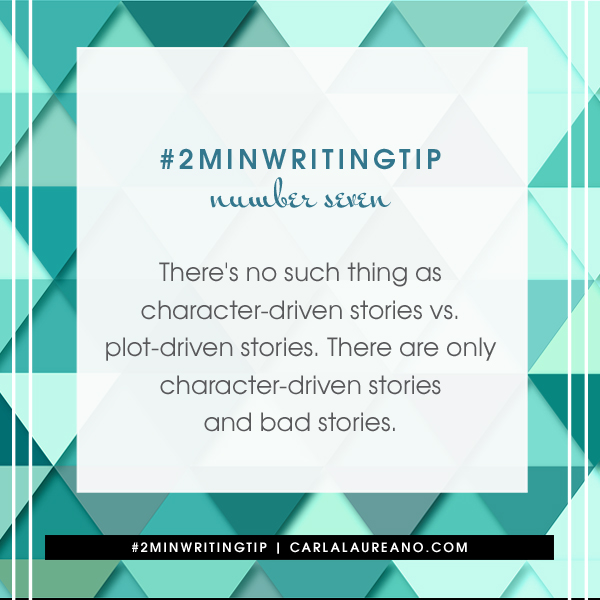 We hear the question a lot: is your writing character-driven or plot-driven? I’m going to make a bold statement and say that’s a false dichotomy. All stories are character-driven or they aren’t very good stories. What we’re actually trying to categorize is the stakes: are they personal or are they more universal?

Let’s take a look at the well-known movie, The Book of Eli. IMDB’s logline describes it as “A post-apocalyptic tale, in which a lone man fights his way across America in order to protect a sacred book that holds the secrets to saving humankind.” Sounds pretty plot-driven, right? We’ve got a bad guy (Gary Oldman) who will stop at nothing to get the book, and a man (Denzel Washington) with a preternatural ability to fight his way out of any situation. It’s gritty and violent and until the end, somewhat hopeless.

It would be easy to characterize this as plot-driven because the stakes are life and death, and it has a strongly action-driven narrative. Yet the entire movie hinges on Denzel Washington’s character, Eli: not just his ability to fight, but his intelligence, his incorruptibility, and *spoiler alert* his faithfulness to a twenty-year divine mandate. Substitute any character for Eli and the entire movie becomes a forgettable post-apocalyptic action movie and not an interesting film about religion as political control through a visceral example of faith.

Let’s look at another well known movie: Sharknado. (Stop laughing.) IMDB’s logline for this movie is: “When a freak hurricane swamps Los Angeles, nature’s deadliest killer rules sea, land, and air as thousands of sharks terrorize the waterlogged populace.” Do you remember who starred in it? I had to look it up. And that’s because it’s a wholly plot-driven movie. Just like the Book of Eli, the stakes are life and death, but you could substitute any character or any actor in it and it wouldn’t make a difference: the purposely-ridiculous premise drives the movie. I’ll give you that it’s enjoyably camp, but I don’t think anyone is going to argue that it’s good storytelling.

Therefore the key to any good story is a character who’s worth following and caring about. They don’t have to necessarily be likable or even understandable…they just need to be interesting enough to carry a story, to make us care about the stakes. Give me someone who intrigues me and wants something desperately and I’ll follow them through a story, big or small.